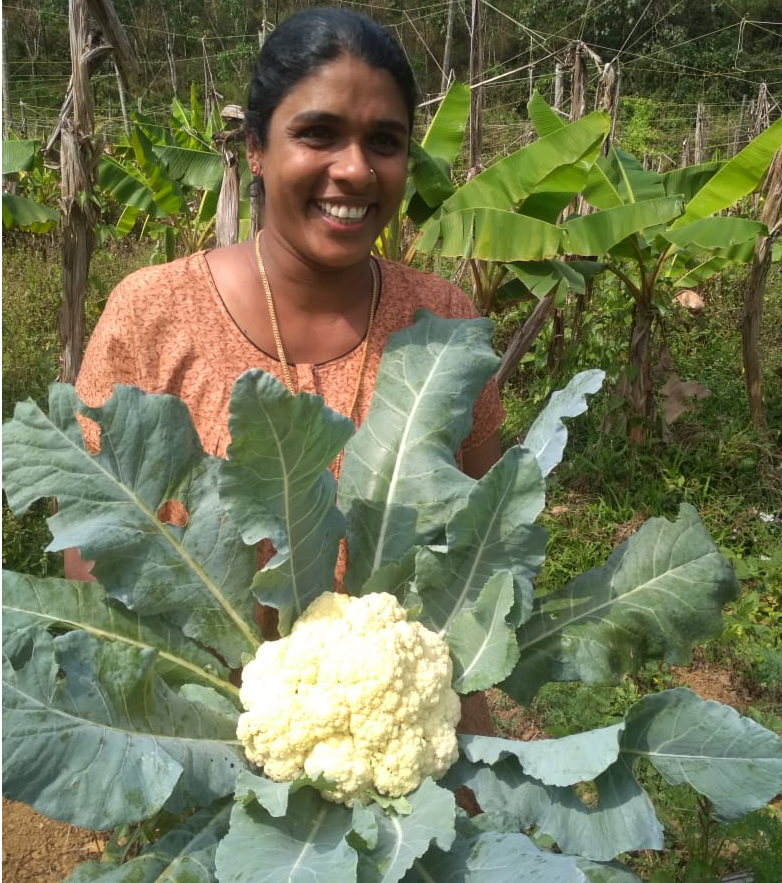 can truly do it all.  Her seemingly endless capacity to be a skilled farmer, a strong leader, and exemplary mother is awe-inspiring.

A visit to Sheeba Valady’s house allows any visitor to instantly witness her compelling personality and range of talents.  With a wide smile, she greets visitors with a bright enthusiasm.  In a swift manner, like that of a magician, Sheeba’s signature snacks will appear – a fresh fruit smoothie, cauliflower fry, even homemade ice cream.  She is proud to share that what she serves is fully organic, most of the ingredients sourced directly from her own farm.

Sheeba’s home is in area called Ambalakkunnu, about a kilometer from the town of Valad.  Ambalakunnu is proudly interfaith, like many communities in Wayanad, and Sheeba’s corner group reflects this.  Under her graceful leadership, every couple of months, dozens of neighbors crowd into Sheeba’s living room, all eager to participate.  Corner groups are community-led structures to facilitate communication, feedback, and engagement with Profugo.  Corner group leaders, like Sheeba, are the social fabric of Profugo’s work and we are grateful for her leadership.  Every year, more community members are excited to join Sheeba’s group and get involved with Profugo.

Sheeba is one of the most skilled organic farmers in this area.  Krishi (farming in Malayalam) has been core to her family’s identity, as she learned from her own father.  She prides herself in this family tradition and hopes to pass on the knowledge to her twelve year-old daughter, Disha, and fifteen year-old son, Rahul.  She appreciates that farming is an effective use of her free time, once her children go to school.  Sheeba’s husband, Rajesh, works for the government Forestry Department.  He fully supports her farming and community engagement endeavors, and the two often partner in these efforts. 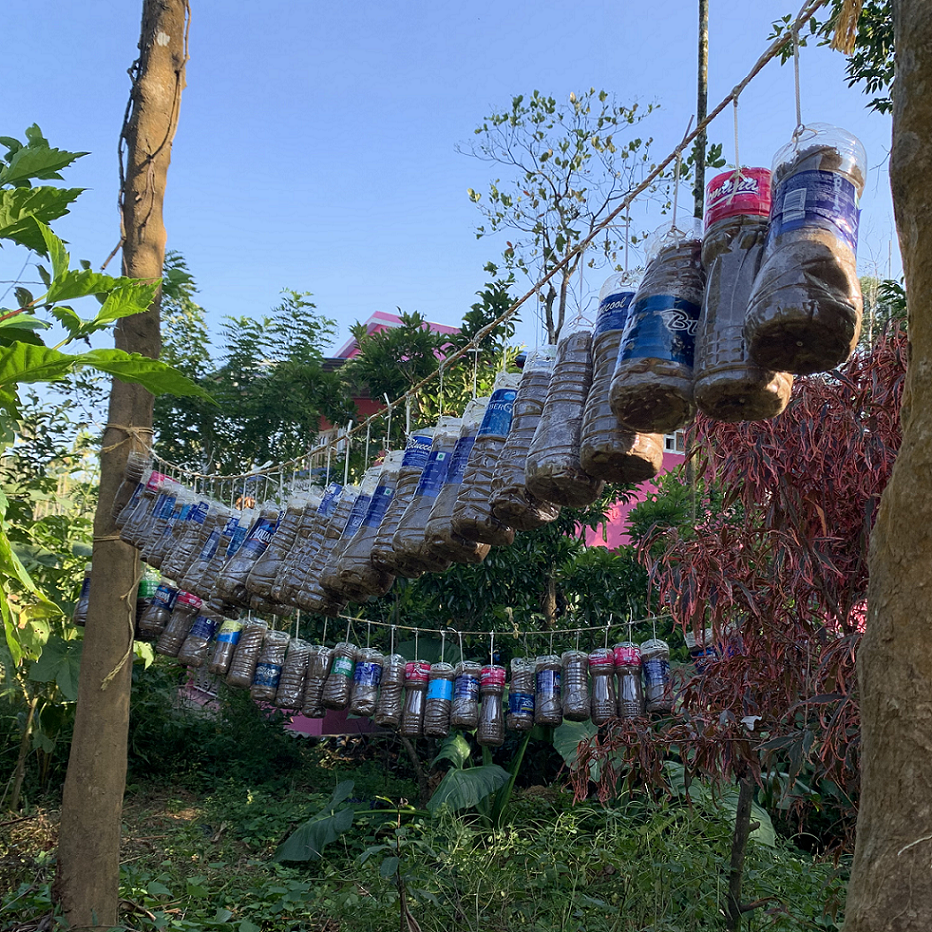 A visit to Sheeba’s farm is a short walk down the road from her home.  Weaving through banana trees, Sheeba’s plot is conveniently located next to a small stream, an ideal water source.  Sheeba’s farm boasts a variety of crops – chilis, cucumbers, cauliflower, mustard, kuttipayar beans, French beans, cabbage, as some examples.  A remarkable aspect of her farm is that whilst her plot is small, she has managed to efficiently use her space to cultivate an impressive diversity of produce.  In addition, Sheeba is innovative.  She took knowledge from trainings (some of which Profugo provided) and experimented on her farm.  Thus, she is able to cultivate crops that are not common to this immediate area, such as potatoes and sesame.  She also uses grow bags, and even upcycled plastic water bottles right outside of her house, to grow even more vegetables.

Sheeba’s vigor and confidence are evident in everything she does.  Once during a field visit to her farm, Sheeba was harvesting a bounty of bananas.  A truck selling coffee passed by and Sheeba flagged it down.  With air of boldness, matched only by her charisma, she (and her new volunteers) loaded her harvest onto the truck.  She hopped on the back and rode down the road to unload directly in front of her house.  She managed to save time and recruit some free labor, in a convivial way that garnered respect, both fro 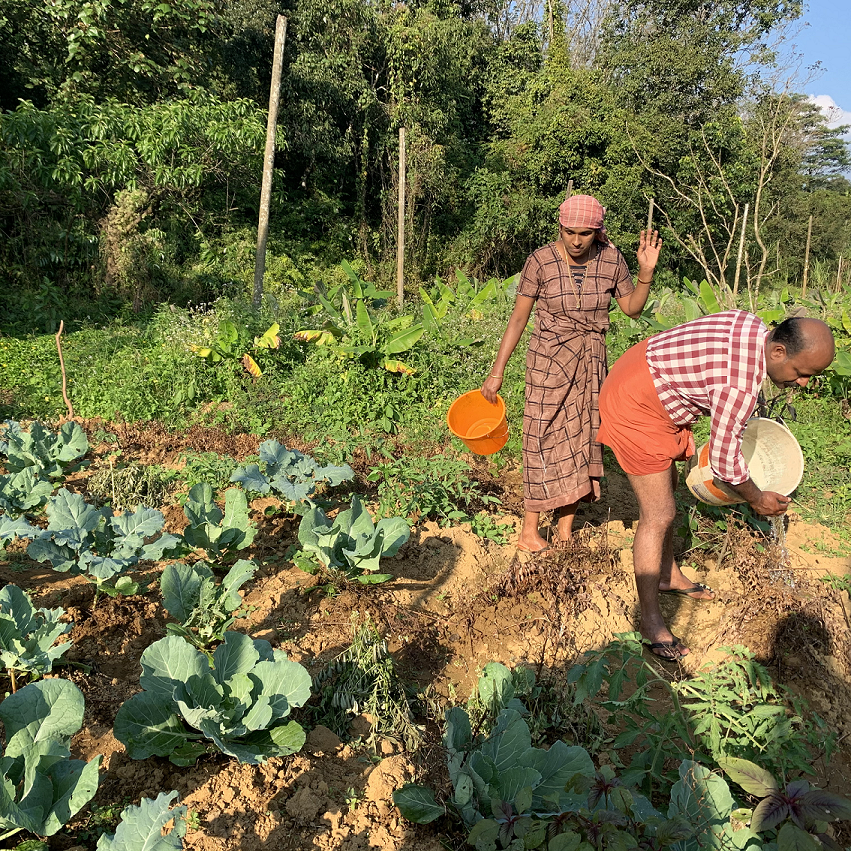 m the coffee sellers and curious onlookers.  Few are as resourceful and self-assured, and this one example speaks to Sheeba’s ability to leverage any available resources and connect with people.

With such abundant harvests, Sheeba uses many of these products for her own family, “self-eating” as the locals would say.  But, she is also able to sell them to her neighbors.  She possesses unique marketing abilities; many local people cultivate organic produce, but few are successful in selling them.  Sheeba is able to explain the benefits of organic produce and compel her neighbors to invest.  As she says, “The organic vegetables have a good taste, compared to the vegetables you buy in the market.  My family’s health has improved; we are at lower risk for diseases (such as) cancer, high cholesterol, and diabetes.” *

For many families in the greater Valad area, it can be a challenge to plan for the future.  Life often requires families to live day-to-day. 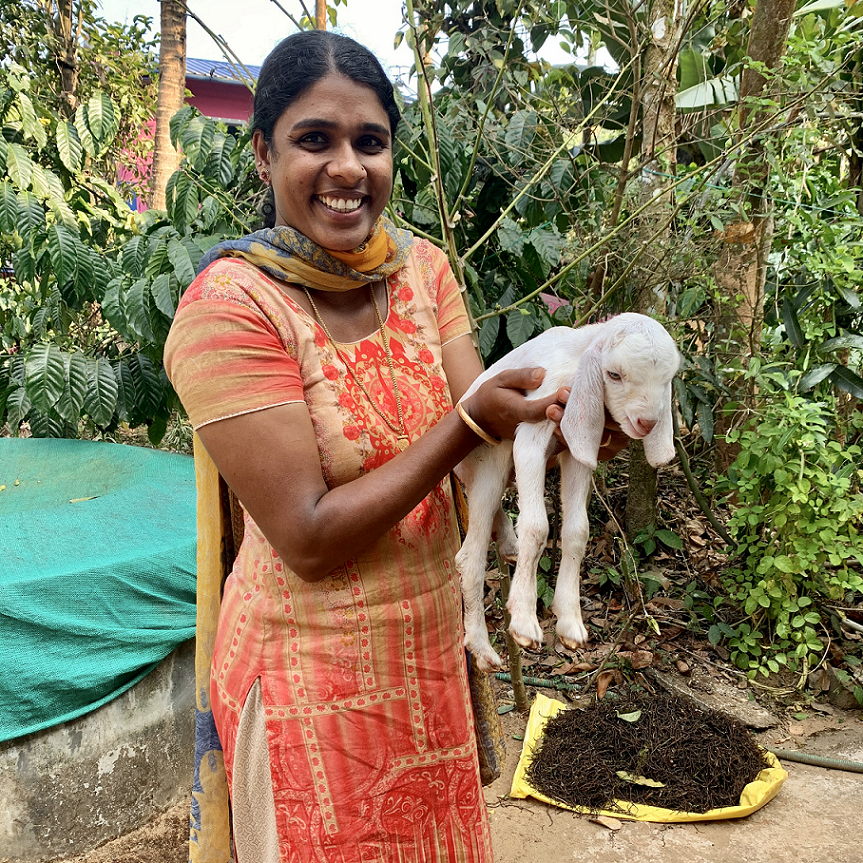 However, Sheeba has managed to generate extra income for her family by selling her organic produce.  She saved these profits and used them to buy two goats.  She then bred these goats, and they gave birth to three kids (baby goats).  These goats provide her family with fresh milk, as well as manure, which is used for fertilizing the soil in her farm.  Sheeba’s story is an astute example of how income generating activities, such as organic farming, can support other income generating activities, such as goat breeding.  Her resourcefulness has increased her family’s livelihoods and ensured a better quality of life.

For someone as powerful and accomplished as Sheeba, she remains incredibly humble.  As much praise as she receives, she denies that what she is doing is extraordinary.  She laughs and sometimes requires a bit of coaxing to explain what she has managed to do.  This is not bashfulness, but rather a reflection of her authenticity – she approaches her work with a sense of grounded purpose.  She is striving to create the best life possible for her family, and through this process, inspiring those around her to do the same.