According to Indian legend, tea was the divine creation of Buddha himself. 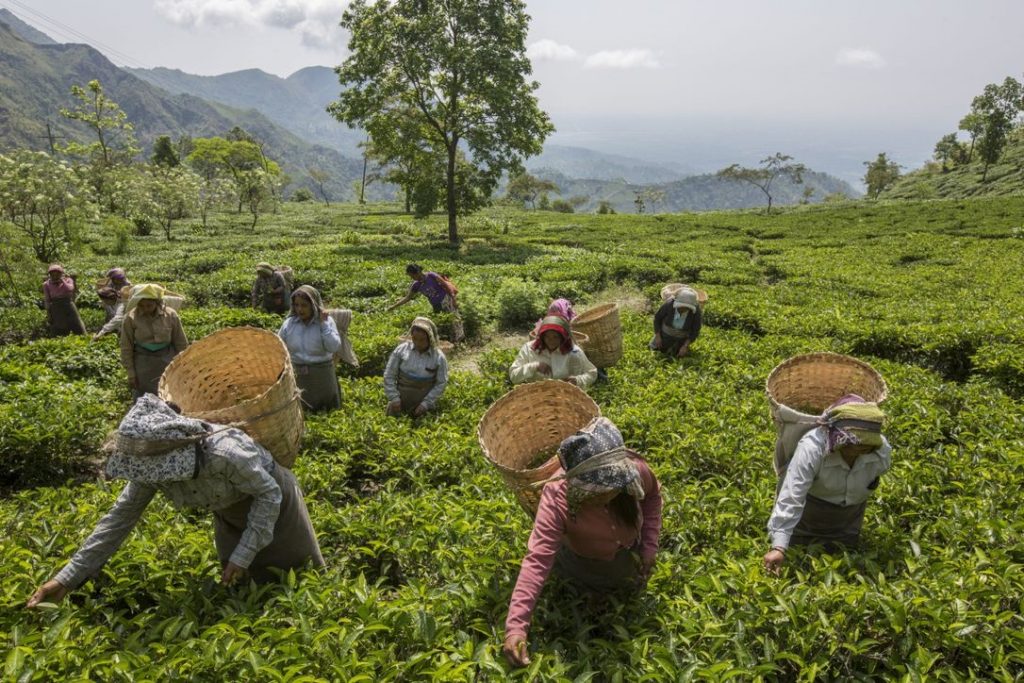 Buddha vowed to meditate for nine years straight without rest, but was eventually overcome by exhaustion and fell asleep. When he woke up, he was so upset by his weakness that he cut off his own eyelids and threw them into the dirt. His skin is said to have taken root in that very spot, germinating into plants that bore leaves in the shape of eyelids. When he chewed up the leaves of this plant, his fatigue vanished. This is believed to be the first tea tree.

India is one of the largest producers of tea in the world – second only to China. Famous for its Assam and Darjeeling varieties, India’s rejuvenating blends can be found in almost any country on this planet. As much as the world loves Indian tea, the country itself and its people are largely influenced by tea production. While there are many large tea plantation operations, small and local farms often play a unexpectedly significant role in India’s tea economy.

The main agricultural exports from southwestern India are tea, coffee, rubber and spices. 18% of all the tea exported from the region of Kerala, India, comes from Wayanad, where our organization operates. Fresh tea leaves are perishable and need to be processed quickly, else they lose their worth, so tea production needs to be a highly efficient system. Smaller farms in this region often sell their leaves to larger operations, who use them to create varieties and blends of their own mass-produced products.

For many of Kerala’s citizens, tea cultivation is their livelihood. As well as paying the bills, tea plays a major role in India’s culture. Tea is a huge part of custom and tradition across Asia, but is especially dominant in India. For thousands of years, Indians have used tea in spiritual ceremonies, as herbal remedy for illness, and in nearly all social settings. Some consider tea to be the national drink of India. Preference varies, but the vast majority of the tea consumed in the country is Masala Chai.

Tea is a staple in all social gatherings in India, including business meetings, study groups, weddings – you name it. It is consumed during every meal, or between meals alongside gathiya and bhajiya, or biscuits and sandwiches. Tea stalls line local streets, where small-scale tea farmers serve their tea off a cart or table. It is customary to offer anyone who enters your house a cup of the flavorful beverage. Tea is ingrained in the lives of all Indians, but it may be hurting them more than they know.

Sustainable and organic farming techniques are being adopted in the region for other crops such as coffee, rice, and spices, but are not widely used in tea farming. Heavy pesticide and fertilizer use over miles and miles of land has many negative environmental effects, including reduction of biodiversity, devastation of non-target populations, and decimation of local water quality from runoff.

India’s regulations regarding pesticide use are problematic for a few reasons. They are not straightforward, nor comprehensive, and are inconsistent across jurisdictions. Pesticide use is widespread to increase yield of tea crops, but growers are not aware of what they are using and how it is having a domino effect on the environment around them. The Tea Board of India sets regulations for pesticide use in tea farming. They approved about three dozen pesticides, but maximum levels of residue were only set for ten of these chemical concoctions. Many believe the government needs to encourage small-scale tea farmers to go organic by providing subsidies to smaller operations, as well as teaching growers the benefits of switching to organic farming. Small farms in India might just be a beacon of hope for taking tea organic.

Considering the sheer size of India’s tea production, it is important we consider the effect of their agricultural practices on the global community. Small-scale tea farms in India may not seem like a big deal, but making moves to improve the environmental effect of India’s tea production practices is a huge step in the right direction, especially in light of our planet’s climate change emergency. Tea plays such an important role in India’s economy and culture. But, their tea also reaches every corner of the world, spreading rich, sweet, and spicy happiness. Let’s make sure we are supporting those globally conscious operations that make the environment a priority as much as they do making delicious tea.